Hanoi Opera House overlooking Trang Tien street is located on the Square of August Revolution. This location is one of the busiest and most crowded areas of Hanoi City.

Hanoi Opera House, a unique theatre in Vietnam near the Old Quarter, was built by the French people in 1901 and completed in 1911 with a French neoclassical style. And, it is considered a copy of the Garnier Opera House in Paris. The Opera House in Hanoi as a symbol of culture, history, and architecture nowadays.

The architecture of Hanoi Opera House

The Opera House in Hanoi is modeled under the influence of the Paris Opera House, but it is smaller, and the materials are changed according to local economic and climatic conditions.

For the overall architecture outside Hanoi Opera House:

The main façade of the Opera House stands out with Roman Ionic columns forming five hollow spaces in the middle and two solid chambers at the gable, and above which is further decorated by a curved roof with stone tiles. Renaissance architectural principles seem to be emphasized here.

However, when approaching the building, the Baroque elements stand out with the winding curves of the balconies combined with the arched form above the entrance, especially the sophisticated decorations, which is created by the result of a combination of architects and sculptors.

Looking at the sides, the Baroque elements are almost overwhelming. The columns only repeat outside the hall, instead of rectangular windows or arches. The walls are filled with decorative motifs, winding support rods; all are rich in sculpture.

The top of the theater gives us a sense of the French neoclassical spirit with black stone tiles. The roof is organized very carefully with a combination of many forms: the pyramid-shaped roof at the connections, curving roofs in the auditorium area, and the triangular roof above the stage. At surrounding and the top of the roofs are emphasized by the attractive sculpting elements.

For the internal architecture of the opera house:

The layout of the Opera House in Hanoi is designed as the type of horseshoes for the large room, the entrance to the hall, and the main staircase. And, the organization of the stage of the Hanoi Opera House is the same as those in Europe at the beginning of the 20th century.

The internal theatre is organized with three parts:

1. Main lobby
This room is the first place to welcome guests to the Theater. A stone T-shaped staircase leading to the second floor is paved with high-quality stone imported from Italy; the stairs with colors matching the space and scale of the lobby create feelings like a big rug. The small chandeliers hanging on the wall are plated with antique copper. Overhead chandeliers are plated with a layer of gold according to new technology.

The mirror room (located on the 2nd floor including the main room and 2 small rooms at two sides) is an essential room to regularly welcome the high-ranking officials, heads of other countries, and the place where the ceremony takes place to sign important documents of the Government.

Also, the mirror room is a venue for performing chamber music shows, press conferences and conducting small conferences. The mirror Room floor is completely restored by the mosaic technique. Mirror floor bricks are taken from Italy, and skilled Italian craftsmen guided to set up by hand to ensure the sophistication of the project. On the walls, each large mirror hangs between two doors. The hanging lamps, crystal chandeliers, tables, and chairs have a French classic style.

3. Audience room
Inside the Theater, there is a large stage and a 24x24m wide audience room, with a total of 586 seats on all three floors. The audience room floor is covered with high-quality bricks and fireproof carpets. The chairs are designed in the classic style of French in the nineteenth century.

This room was ornately decorated with Corinthian columns supporting a ceiling that was painted by colorful frescoes, plaster embossed paintings, and a large gold-plated crystal chandelier. These paintings were painted by French painters.

Finally, behind the stage are 18 dressing rooms for actors, 2 gyms, working rooms, a library, and a meeting room.

Now, many of you wonder: “Why did the French construct this opera house?” Keep looking below to know the reasons.

Reasons the French built an Opera House in Hanoi

In the late nineteenth and early twentieth centuries, the large number of the French emigrated to colonial countries, including Vietnam. In Hanoi, there were many French people retired but not returning, who had joined the French army and the government apparatus used to work in this city. These people formed their own communities that had begun to have many cultural and artistic activities.

They have devised a lot of games and entertainment. Amateur music players gathered together into bands. Drama lovers set up teams to perform together. At this time, Hanoi and Hai Phong (the city closest to Hanoi) did not have a theater. Therefore, the French community desperately needed a theater because expatriates want spaces for their own artistic activities.

One day in the middle of the summer of 1901, Hanoi Opera House was started with the leveling of land which was the swamp of two villages of Phuc Lam, and Tho Xuong district (former name of Trang Tien and Hoan Kiem districts in Hanoi, Vietnam).

According to historical documents, 300 workers had worked every day. They used concrete blocks to press 35,000 bamboo piles with nearly a meter long to reinforce the foundation of the theater. About 600 tons of iron and steel and 12,000 m3 of materials had been used for construction. The working lasted for a decade and was completed in 1911. The Opera House Hanoi was a luxury building with stairs stretching ahead, the doors overlooking the Theater Square (today called the Square of August Revolution).

In the past, this Opera House was a place to perform classical art types: Opera, chamber music, drama … The audience came here mainly from the upper class French and rich Vietnamese people.

Then, this work was associated with many historical events of the August Revolution and the early years of Vietnam, such as the meeting of the Viet Minh (August 17, 1945), the Liberation Army of Viet Bac returned to Hanoi (August 29, 1945), the first day President Ho Chi Minh came to the Hanoi Opera House (September 2, 1946), the National Assembly met to sign the 1946 Constitution…

How can you visit the Hanoi Opera House nowadays? Please continue reading below to know more details to visit it easily.

The opera house is one of the famous attractions in Hanoi, which is also a venue for professional music programs for the people of Hanoi, senior officials of other countries, and tourists.

Open to tourists every Monday and Friday, Hanoi Opera House has welcomed many visitors to visit the house and enjoy the art.

Coming to the Opera House of Hanoi, visitors will have about 90 minutes to learn the history of the building, explore the display area of artifacts associated with its development. With this experience, travelers can see the luxurious space of the theatre that is like the paradise of art.

At the entrance is the main hall with a stone T-shaped staircase leading to the 2nd floor, the marble on the floor, a small wall-mounted chandelier system with antique bronze plating, and crystal chandeliers plated a sophisticated layer of gold. Especially, the staircase of Hanoi Opera House has remained original since its construction in 1911.

The Chamber of Secretariat is also called the Mirror Room on the second floor. It is the venue for important ceremonies, the signing of government documents or the reception of high-ranking figures.

Travelers can see traces of bullet marks in the battle of Hanoi in 1946 that were still intact. This was the opening battle for the First Indochina War between Viet Minh forces and French expeditionary forces (December 19, 1946 – February 18, 1947).

And, visitors can come to the auditorium area, where cultural activities, performances of Vietnam and other countries are shown. The auditorium of the theater has a size of 24×24 m with a large stage, three floors of seats, a total of 586 seats.

While visiting the Opera House, guests can enjoy art performances with folk shows in the auditorium.

Do you plan to visit this famous theatre in Vietnam? Tell us your feelings when you visit Hanoi Opera House, please! 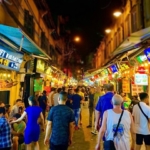 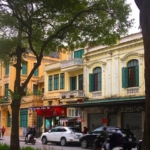 French Quarter in the heart of Hanoi 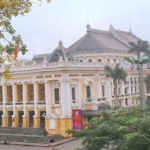 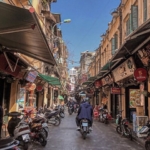