Being normal and peaceful as many other places in Central Vietnam, the Ben Hai River and the land along the river became famous and known worldwide as soon as the US came and wanted to turn the South of Vietnam into its new colonial.

Many people have come and many others wish to come here to see “the historical witness” which suffered the painful wound of national division for nearly 20 years and witnessed plentiful cases of the sacrifice of people on both sides of the river for the reunification of the country. 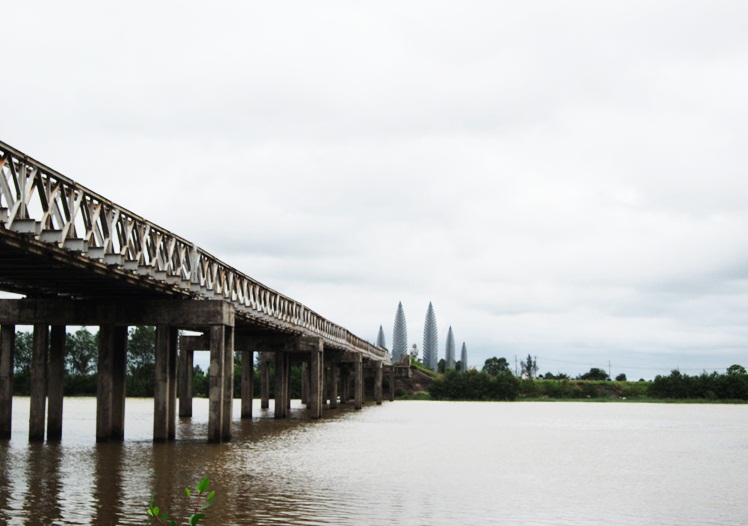 This historic river Ben Hai has its former name after Minh Luong. It is 100 kilometers long, 200 meters wide at the largest part. It originates from Truong Son range and goes along parallel 17th in the West-East direction (at the present boundary between Vinh Linh and Gio Linh districts) and reaches the East Sea at Cua Tung.

In the West, it is Truong Son mountain range. At the border between Vietnam and Laos, there is a very high mountain called Dong Mang and a spring, which is very clean and fresh all year round.

According to the legend, angels used to go there for swimming. One day, the angels realized that earthy men watched them. Getting angry, the angels went back to Heaven and ordered the Mountain God to punish such people. Those who passed this way had to wear a big chain at the neck. The chain is so big and heavy that it kept people not looking aside or up. Those who did not obey this will be killed by the Mountain God.

From this mountain, the spring divided into two streams. One is named after Sebangchieng flowing to Laos and the other named Ben Hai flowing to Vietnam.

The Ben Hai River flows about 80 kilometers to the East and then mingles with Sa Lung River coming from North-West. Standing at Hien Luong Bridge, we can see the two rivers clearly. The mingling of the two rivers flows pass Minh Luong village (on the north side of the river) so that the river was named Minh Luong. Under the Minh Mang dynasty, because the river name is “Minh” as the same of the King, the river name had to be changed as Hien Luong.

After the Geneva Agreement signing (July 20th, 1954), the Ben Hai River was well-known worldwide. According to the Agreement, Vietnam was divided into two parts at the parallel 17th: the North and the South. The parallel was considered as the temporary boundary for two years until the general election would be carried out in July 1956.

According to this Agreement, the DMZ was established along the Ben Hai River, 5 kilometers away from the riverbanks. The DMZ line was identified by white painting milestones and signs written in both Vietnamese and French:

At the DMZ, both sides were not allowed to allocate military forces except the police for guard and security at the boundary.

In fact, the reality was quite different from this regulation. The US and its followers had goals to divide our country for a long time. They wanted to turn the South into a separate country, confronting against the North and the people’s desire for the national unification. The imperialist US who replaced colonial France carried out the barbarous war during 21 years. The Ben Hai River became a painful symbol of the national division instead of the temporary boundary.

There were many moving and painful stories in this dividing area. A child who was saved and taken to the North bank of the river often went to the river and called “Mum” who was kept in the South Riverbank.

The mother cried each time when hearing the call of the child but did not know what to do. It is only a dozen meters away but people at the riverbanks were unable to meet each other for the dozen of years. They contacted each other through signals. For example: to inform of the dead person, people in the South bank wore funeral clothes and put two hands on their face, to inform of a person being caught, people in the South showed the two hands tied at the back, to encourage the fight, people showed their tight fist upwards. It is said that for one funeral, there are “4” groups of people escorting: one group in the South bank, the other group going along on the other bank, and the two shadows of the two groups reflected in the water also going along. It was a sad reflection of the division.

They beat or killed anyone who had the idea of crossing the boundary for the relations with the people on the north side. Seeing such barbarous acts of the US and the followers, people on the Northside could not do anything because we had to abide by the Agreement. People on the north bank often cried
“Seeing the enemy but unable to shoot them” (in the period 1954-1964)

Many people in the South are threatened because their husbands or wives live in the North. In the end, they had to get rid of their beloved.
Many people who could not bear the pressure and domination of the US and the southern military had risked their lives by swimming across the river. For example, on May 20th, 1967, people in Xuan My, Bach Loc, and Trung Son villages escaped from the concentrated hamlets and swam across the river. At the other side of the river, people on the north bank rowed their boats to save the swimming people. The enemy in Doc Mieu informed the Fleet No.7 to shoot artillery on people crossing the river. At Tung Luat wharf, Tran Thang was known for his bravery and he received the medal of Ho Chi Minh. At Trung Son, the US artillery killed and wounded 120 people.

At Hien Luong Bridge, the southern soldier who got educated by the northern people drove the car to cross the bridge. When the car touched the line in the middle of the bridge, its tyres were shot flat. The soldiers in the car had to get back and were put in prison.

However, there was a saying “No sword could chop Ben Hai river”. With the tradition of bravery and the mind of revolution, solidarity and the blood relations between the North and the South people, people on both sides had to stand the war and death to protect the country and fight for the national unification. The ambition of the imperialist US and the southern army as being “Level the Ben Hai River and goto the North” was completely failed in 1972 when two-thirds of Quang Tri province was liberated. (Quang Tri Management Board of relics and tourist sights)

Please fill out the form to contact us for any requests! Or Whatsapp +84 934 889 667 to our phone! Thank you!
Please share this!
About the author