Hue Imperial Citadel, or the Imperial Palaces, locates in the city center of Hue, Vietnam. It was started in 1805 under the reign of Emperor Gia Long and completed in 1832 under the reign of Emperor Ming Mang. Under Nguyen’s reign, the Kings ordered to build ramparts, palaces and constructional works of royal. Over 200 years to now, it is still original with nearly 140 small and large constructions, and this site becomes one of the top tourist attractions in Hue City, attracting thousands of tourists every year.

The Citadel has a square in shape and almost 10km in circumference, 6m high, 21m thick and 10 entrances. On the top of the walls that surround it, has an ancillary gate connecting with the Tran Binh Bastion called the Thai Binh Mon (Peace Gate).

The Citadel has the two main parts including the complex of Imperial Royal Palaces, and the system of the outer wall and buildings supporting for working and protecting the Nguyen Kings.

Imperial Enclosure of Hue (or Hue Imperial City) is the second perimeter of rampart with a perimeter of 2,450m. It is at the Hue city center, Vietnam. It is accessible through four gates: Ngo Mon (Noon Gate) to the south, Hoa Binh (Peace) to the north, Hien Nhon to the east, and Chuong Duc to the west. Ngo Mon is the main entrance gate of the city. Formerly it was reserved only for the passage of the kings. This is among the few ancient infrastructures that have remained almost intact.

This three-story structure is 58m long, 27m wide and 17m high and serves as the main entrance to the Hue Imperial City. There are five gates to Ngo Mon with the central gate being reserved for the kings only. The two adjacent gates are exclusively for court officials. The other two outer gates are used fro servants and members of the royal entourage. On top of the arch is the Five Phoenix Tower where the king was seated during festivities. This was also where ceremonies were organized to announce the names of successful candidates from royal examinations. During Nguyen king’s reign, Ngo Mon Gate was opened only when the kings were passing by or when the kings received foreign ambassadors.

This palace was built in 1805 according to 19th century architectural designs for palaces and temples. The palace is composed of two buildings joined together, the anterior palace and the main palace, where the golden throne of the king is located. Thai Hoa palace is the most important building of the whole capital where organized ceremonies of the court are.

Great Golden Gate (later-Gate of the Great Palace), the main entrance to the Forbidden Purple city, is a wooden red – and – yellow – lacquered structure. It was originally built by Emperor Minh Mang in 1833, on the site of the Gia Long – period Throne Palace (1805).
Great Golden Gate is the most splendid and elegant gate compared with all others in the Imperial City. It is bright yet harmonious in color. In the middle is a door open only to the Emperor or State guests.
The Great Golden Gate was destroyed by fire in the anti-French war (early in 1947).

Place of Audiences (Dien Can Chanh)

This is the working office of the Nguyen Emperors. Architecturally it looks prettier than the Throne Palace. Unlike the Throne Palace, the middle compartment of the Palace of Audiences is supplied with a carved bed with elbow-rests for the Emperor. On the wall hang provincial maps. It is also a gallery exhibiting the most valuable antiques of the Nguyen Dynasty.

Situated southwest of the citadel and facing south, The Mieu Temple is dedicated to ten Emperors of the Nguyen Dynasty. Built by Emperor Minh Mang in 1821, it presents a 9 compartment main building and an 11 compartment front building, together connected in the “double” architecture with two bays on east and west sides. It is roofed with yellow enameled tiles and on the ridge rests a wine gourd decorated with Phap Lam enamel.

Situated on the southeast corner of the Imperial City and facing south, the temple is dedicated to nine Nguyen Lords. It is built in 1804 by Emperor Gia Long, containing a 13 – compartment main building, a 15 – compartment front building added with two east and west bays.
The present-day was constructed by Queen Mother Tu Cung (Mother of Emperor Bao Dai) during 1970.

It was constructed in 1821 by Emperor Minh Mang; architecturally similar to Trieu Temple with a 3 compartment main building connected with a 5-compartment front building in the “double” architecture. On the roof, a wine gourd is decorated with Phap Lam enamel.
In the middle compartment is the cult niche dedicate to Lord Nguyen Phuc Luan (1733-1765).

Hien Lam Cac is a memorial to remind younger generations of the merits and contributions to the Nguyen Dynasty of certain individuals. Like the Nguyen Kings who were worshipped in The Temple, those meritorious people were worshiped in the two halls located on either side of Hien Lam Cac.
Hien Lam Cac was built within the site of the Temple and was made of wood. The three-story building is 25 meters high, the tallest building in the Imperial Enclosure.

It is the temple where ladies living in the Imperial City came to pay homage to the cult of Nguyen Emperors on festive occasions. Inside the temple installed seven altars to honor the cult of Emperors and Queen; the same as The Mieu Temple (Temple dedicated to Nguyen Emperors) which is closed to all women. This explains the presence of the Phung Tien Temple.

All furniture in the residence is inlaid with the best mother-of-pearl. Hung from the ceiling is elaborately carved lanterns. Along the wall supporting the ceiling are shiny panels ornamented with black fans made from rare birds feathers. Through a widely-spaced blind, one can see unusual, intricately carved beds smelling of cinnamon. From the entrance, one sees to the east a little lake with a graceful rock-garden called the Truong Du Pavilion.

Hue Forbidden City is located inside the Hue Imperial City, behind the Throne Palace, the Forbidden Purple City is reserved for Emperor and his family. Constructed early in Emperor Gia Long’s reign in 1804 with brick walls 3.72m high, 0,72m thick, about 1,230m in circumference. Its front and back sides are 324m each while either left and the right side is more than 290m including 50 architectural constructions of different sizes and 7 gates for facilities of entrance and exit. Dai Cung Mon (the Great Palace Gate) is on the front side for Kings. Can Chanh Palace (the place for every day working of Emperors). Can Thanh (Emperor’s Private Palace), Khon Thai Residence (Queen’s Private Apartment) reserved for the Queen. Duyet Thi Duong house (Royal Theatre), Thuong Thien (the kitchen for the King’s food), Thai Binh Lau (King’s reading room). Besides, Hue is also famous for royal tombs and temples of Nguyen Kings. Seven tombs with different aspect are not only a wonderful arch but also combining beautiful imposing nature and poetry of Hue.

Kien Trung Palace (Emperor Khai Dinh’s Private Apartment), situated behind the Cao Minh Trung Chinh Palace, is a big building elaborately built in a half Asian, half European architecture. In Emperor Minh Mang’s reign (1827), the location of the later Kien Trung Palace was occupied by a 10.8m high, three-storeyed pavilion roofed with yellow enameled tiles. From the top floor, one could see clearly the distant landscape. The pavilion, therefore, was named Minh Vien (Good View) and listed by Emperor Thieu Tri top of twenty beauty spots of the capital city. 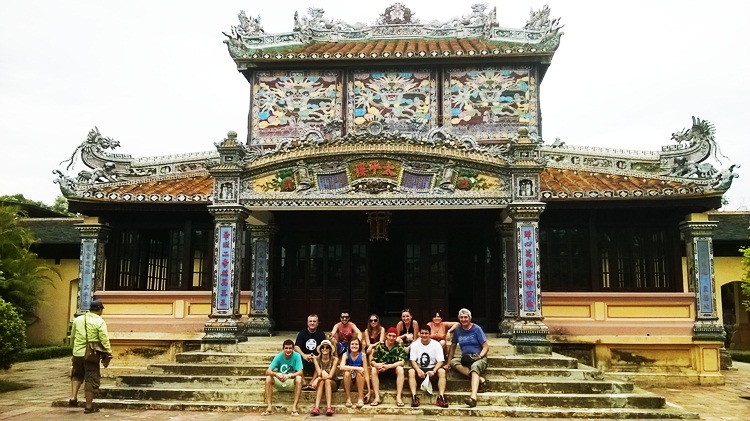 The Royal Library – one of the most beautiful buildings of Hue Forbidden City – is the pavilion where the Emperor came for reading and resting. In 1821, by order of Emperor Minh Mang, a building was erected west of the Thieu Phuong Garden (Garden of Lingering Aroma), called the Tri Nhan Mansion (Mansion of Intellect and Mercy). It was later improved and renamed Thanh Ha Thu Lau (writing Pavilion) by Emperor Thieu Tri, and then, by Dong Khanh for another building known as the Royal Library.

Located east of the Quang Minh Palace (Palace of Brightness) in the Forbidden Purple City, the Royal Theatre was built by Emperor Minh Mang in 1826. Royal Theatre is the oldest of Vietnamese traditional stage that remains. It was closed after the end of the monarchy (8 Jan, 1945). During the US temporal occupation, it was used by the South Government for the Hue’s Music College (the present is Hue College of Art).

Situated on the northwest corner of the Imperial City and behind the Dien Tho Residence, Residence of Longevity is a building complex constructed in 1822 by Emperor Minh Mang for entertainment.

The Flag Tower also called the King’s Knight, is the focal point of Hue city. It is commonly known as a flagpole, but viewed from the imperial city; it is really a huge structure of three flat-top pyramids, one lying on top of another. It was built in Emperor Gia Long’s reign, October 1807, and improved later by his son, Emperor Minh Mang. According to the Truc Luc (Nguyen Dynasty’s Chronicle), the flag-tower is 17,40m high and consists of three terraces.

These nine holy cannons are housed in two buildings beside the The Nhan and Quang Duc Miradors in the old citadel of Hue.
On January 1st, 1803, Emperor Gia Long ordered all bronze wares of the Tay Son dynasty to be collected and melted into nine cannons. The work was completed at the end of January 1804. The cannons were named after the four seasons and the five elements: Metal, wood, water, fire, and earth. They are the “Holy invincible Generals”.

It is a 7-compartment, 2-bay building constructed in the “double” architecture, originally called the Long An Palace (Emperor’s Security) in the Bao Dinh Residence of Tay Loc precinct. When French troops took Bao Dinh Residence for their headquarters in 1885, Long An Palace was removed and materials were stored. But, in 1909, by order of Emperor Duy Tan, they were moved to the present-day site (3 Le Truc Street) where was built the New Library and Office of Association of Friends of Old Hue.

Lying on the left bank of the Street of six ministries (Now Dinh Tien Hoang St) at the Trung Hau precinct (Thua Loc – Thua Thanh), the lake is one of the well-known beauty-spots of ancient Hue.

The site is a vestige of a tributary of the Perfume River which took the source from the Kim Long (Golden Dragon) market and flew past the citadel of Hue. This part of the river was diked and broadened by Emperor Gia Long into a rectangular-shaped lake known as the Ky Te Lake. Two islets, each has a storehouse for gunpowder and sulphur the lake. Both storehouses were moved a little eastward (3) by Emperor Minh Mang. The site was then occupied by palaces, pavilions, and belvederes that made it one of the top beauty-spots of the old capital city known as the Lake of the Serene Heart.

Terraces of the Territory and Grain Gods (Dan Xa Tac)

Situated on the southwest corner of the citadel, the terraces are dedicated to the territory god and grain god. Territory means country. The territory god was traditionally considered the guardian spirit who kept the country safe. That explains the presence of the Terraces at the Ngung Tich precinct built in 1806 by Emperor Gia Long (later Thuan Cat and present-day Thuan Hoa precinct).

It is the office to which people appeal against their sentences. Founded in 1832 by Emperor Ming Mang right at the foot of the citadel and almost between the Thuong Tu (Royal Stable) and Ngan (Separated Miradors), the office comprises representatives of the Ministry of Justice, the Inspection Department, and the Supreme Court (present-day Court of Appeal).